Q1: What are the risks related to the introduction of AGM?
Q2: Why does the maritime industry have a role in managing AGM risks?
Q3: Which ports are infested by AGM and at what time of the year
do the AGM females lay their eggs?
Q4: Which countries regulate and inspect arriving vessels for AGM?
Q5: What are the criteria for classifying a vessel as high risk of AGM?
Q6: What is required from a vessel that is classified as high risk of AGM?
Q7: Are the regulating countries performing AGM inspections all year round?
Q8: What happens if AGM egg masses are detected during port inspections?
Q9: What are the county specific requirements?
United States of America (US)
Canada
Chile
Australia
New Zealand
Q10: How can the crew reduce the vessel’s risk of AGM infestation?
Q11: Are there other relevant sources of AGM information?

The Asian Gypsy Moth (AGM) is a
destructive forest pest known to
spread via ocean-going vessels in
international trade. Vessels calling
at certain ports in the Asia Pacific
between May and September
should therefore be inspected
and “certified free of AGM” prior
to departure, this to minimise the potential for regulatory action when
arriving in a country where the pest is not native.

AGM is an exotic pest with established populations only in countries in the Asia Pacific, such
as Russia, China, Korea, and Japan. If introduced in countries where it does not exist naturally,
it has the potential to seriously affect the country’s agricultural and forest resources. Adult
moths frequently lay their egg masses on vessels and shipping containers, and since these
egg clusters often survive to hatch at ports of call around the world, exclusion efforts are
considered a priority by many local port authorities.
Preventing the introduction and spread of AGM is a shared responsibility that relies on
cumulative efforts at origin, en route and at arrival in port. However, it is the responsibility of
the ship operator to meet all port entry requirements related to AGM and managing the risk
at its origin to ensure that a vessel is free of AGM upon departure from ports in the infested
areas is recognised as the key measure.

General knowledge about the AGM and each country’s requirements on how to manage
AGM risks will minimise the potential for regulatory action and delays during port entries.
The purpose of this FAQ is therefore to provide answers to some of the AGM related
questions raised by Gard’s Members and clients, to summarises the requirements set forth by
each of the regulating countries and provide links to relevant government websites. The FAQ
also contains guidelines for how the crew can carry out systematic self-inspections onboard
the vessel while en route.

Q1: WHAT ARE THE RISKS RELATED TO THE INTRODUCTION OF AGM?

The United States has detected and eradicated many AGM infestations in the past and in an AGM pest alert from April 2016, their Department of Agriculture describes the risks as

follows: “Large infestations of AGM can completely defoliate trees, leaving them weak and
more susceptible to disease or attack by other insects. If defoliation is repeated for 2 or
more years, it can lead to the death of large sections of forests, orchards, and landscaping.
Any introduction and establishment of AGM in the United States would pose a major threat
to the environment and the urban, suburban, and rural landscapes.”

Q2: WHY DOES THE MARITIME INDUSTRY HAVE A ROLE IN MANAGING AGM RISKS?

Attracted to lights, the AGM females often lay their eggs on a vessel’s superstructure.
Vessels and cargo, such as containers, are therefore known to be involved in the artificial
spread of the pest by carrying the egg masses from one port to another. AGM egg
masses tolerate extremes in temperature and moisture, and the larvae can, under the
right conditions, hatch from an egg masse up to a year after it was attached to a vessel’s
structure. After hatching, the larvae travel great distances with the wind to find food and
may colonise in a new country if left unaddressed. It is therefore vital that the maritime
industry and relevant port authorities collaborate on measures to minimise the risk of AGM
incursions and implement procedures and policies emphasising vessel inspections.

Q3: WHICH PORTS ARE INFESTED BY AGM AND AT WHAT TIME OF THE YEAR DO
THE AGM FEMALES LAY THEIR EGGS?

AGM is found in Asia Pacific and there are high density populations in ports in East Russia,
Northeast China, Korea, and Japan. These AGM infested areas are also referred to as the
regulated areas or the risk areas.
The AGM flight season, when females lay their eggs, extends from May to September,
primarily from July to September in East Russia and northern Japan, from June to
September in Korea and China, from mid-May to mid-September in the remaining parts of
Japan depending on the specific port location. The AGM flight season is also referred to as
the specified risk period or the high-risk period in each of the regulated areas.

Q4: WHICH COUNTRIES REGULATE AND INSPECT ARRIVING VESSELS FOR AGM?

Countries where this pest is not native and that are currently known to regulate and inspect
arriving vessels for AGM are: the United States, Canada, Chile, Australia and New Zealand
(the regulating countries) and question Q9 below provides an overview of their relevant
requirements. However, authorities in other countries are also likely to be alert to the risk of
this invasive and destructive pest.

Q5: WHAT ARE THE CRITERIA FOR CLASSIFYING A VESSEL AS HIGH RISK OF AGM?

In general, and since the AGM larvae can hatch from egg masses up to a year after they
were laid/attached to the vessel, a vessel which has called at a port in a regulated area
during the specified risk period of the current or previous calendar year is considered high
risk of AGM. However, there is no uniform international definition of the regulated areas or
specified risk periods and we refer to Q9 and the country specific requirements for further
details.

Q6: WHAT IS REQUIRED FROM A VESSEL THAT IS CLASSIFIED AS HIGH RISK OF AGM?

The regulating countries generally require all arriving vessels to declare whether they have
traded to ports within the regulated areas in the current or previous specified risk period and
the need for an inspection will be determined based on an assessment of the vessel’s overall
AGM risk. Most regulating countries also require vessels to be certified free of AGM. Please
see Q9 for details about each country’s entry requirements.

Q7: ARE THE REGULATING COUNTRIES PERFORMING AGM INSPECTIONS ALL YEAR
ROUND?

Vessels entering a regulating country may be subject to inspection at any time of the year
to verify freedom from AGM. However, as the potential for larvae to hatch from egg masses
attached to a vessel in port, and spread, depends on the local climatic conditions at a
specific port, each of the regulating countries may specify certain periods of the year with
heightened surveillance and more systematic inspection for AGM. Please see Q9 for details
about each country’s inspection procedures.

Q8: WHAT HAPPENS IF AGM EGG MASSES ARE DETECTED DURING PORT
INSPECTIONS?

Actions imposed on the vessel depend on each country’s regulation, taking into account
climatic conditions at the time of entry as well as the degree of AGM infestation, and the
stage of development of the egg masses detected.
In some cases the vessel may be allowed to berth before being cleaned and handled with
insecticide spraying whilst alongside. In other cases, if the vessel’s itinerary indicate that the
presence of AGM life stages are possible and large amounts of egg masses that appear fresh
and viable for hatching are detected, the risk may be considered too high and the vessel can
be ordered to leave the country’s territorial waters immediately. In extreme cases, vessels
may be refused entry for up to two years during the AGM risk periods in that country (e.g.
Canada).

Q9: WHAT ARE THE COUNTY SPECIFIC REQUIREMENTS?

Below is a summary of available information from each of the countries known to regulate
and inspect arriving vessels for AGM. Each country’s definition of AGM regulated areas
and specified risk periods as well as entry requirements and inspection procedures are
emphasised. 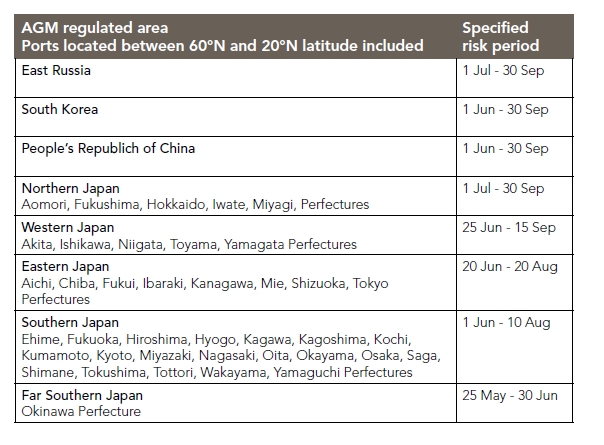 previousMaritime cyber risk management: boiling the ocean or storm in a tea cup?