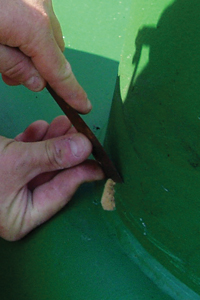 Asian Gypsy Moth – Introduction
The Asian Gypsy Moth (AGM) is a highly destructive forest pest that feeds on both deciduous and coniferous trees.
The voracious appetite of AGM larvae (caterpillars) coupled with the ability of the female moth to travel up to 21 nautical miles can cause widespread defoliation leaving trees weakened and susceptible to disease and other pests.
AGM is found in the Far East with a high risk of infestation of vessels with AGM eggs in Korea, Northern China (North of
Shanghai; North of latitude 31 ̊15’N), and in particular in the Russian Far East and Japan during the flight season of the female moth.
Due to the destructive nature of the AGM, the following countries, where the pest is not indigenous, have procedures
in place to prevent AGM entering on vessels and becoming established:
•Australia
•Canada
•Chile
•New Zealand
•United States

Inspections
The inspection of vessels for the presence of egg masses, their removal and disposal are the principal tools in preventing AGM
becoming established in new regions. Some destination countries require vessels that have called in high risk countries
during the flight season to be inspected for the presence of AGM by a nominated authority immediately prior to departure.
If no signs of AGM infestation are found, the nominated authority will issue the vessel with certification stating that it is free of AGM; depending on the issuing authority the certificate may be a “Certificate of Inspection of Freedom from the Asian Gypsy Moth” or a “Phytosanitary Certificate”. If multiple ports in the same country or a number of ports in different countries within the high risk area are visited, the official inspection
should be undertaken immediately prior to departure from the last port in the high risk area.

previousOCIMF Tanker Management and Self-Assessment 3 – Are you ready?