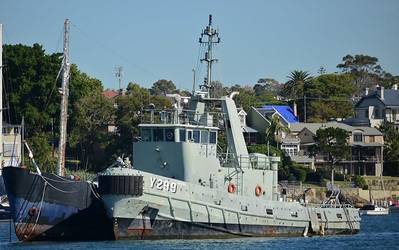 The owner of an unseaworthy tug boat was convicted of hindering an Australian maritime safety official in Cairns Magistrate Court on October 13.

Anthony Roy Wolfe was found guilty, with a conviction recorded on his criminal record for the next 10 years and fined $750 for hindering an Australian Maritime Safety Authority (AMSA) inspector who detained Wolfe’s ex-navy tug, the Wallaroo.

At the time, Wolfe intended on using Wallaroo to transport shipping containers from Cairns to Papua New Guinea under a commercial arrangement, but an inspection in Brisbane revealed serious deficiencies with watertight hatches, defunct firefighting equipment and no life raft on the vessel, leading to the tug’s detention under the Navigation Act for unseaworthiness.

During the inspection, Wolfe became aggressive and engaged in an expletive laden tirade forcing the inspector off the vessel and hindered him in the course of his duties, AMSA said.

“Our inspectors work every day to make the seas a safer place to work and to protect Australia’s precious marine environments from the impacts of shipping and unseaworthy vessels like Wallaroo,” Schwartz said.

“Our inspectors serve the Australian community, in particular the coastal towns and tourism hubs like Cairns which depend on the sea for their livelihoods.

“Mr. Wolfe’s criminal conviction should serve as a reminder that the Australian community and AMSA will not tolerate this kind of vile behavior.”