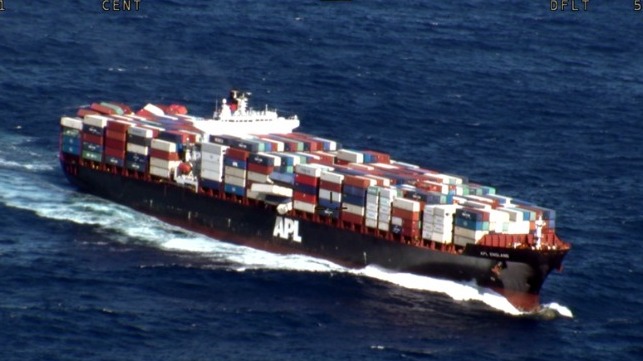 Charges have been laid against the master of the APL England, which lost about fifty containers off the coast of Sydney. The offences relate to pollution and/or damage of the Australian marine environment as a result of poor cargo loading.

The Singapore-flagged ship of 5780 TEU lost its cargo on Sunday 24 May after it had temporarily lost propulsion on rough seas southeast of Sydney. The crew finally managed to restore propulsion and to reach the port of Brisbane. In addition to the approximately fifty containers lost, another 74 were damaged.

On 28 May, Australia’s Maritime Safety Authority (AMSA) announced the container ship had been temporarily detained in Brisbane, Australia. Inspections by the port authorities on board the ship had shown that there were flaws in the lashing systems, including corroded fastening points. This was followed up by an announcement that charges had been laid against the ship’s master. If found guilty, he risks a fine that could exceed 300,000 US dollars.

AMSA General Manager Operations Allan Schwartz said laying charges against the ship’s master was not undertaken lightly. ‘This and other incidents remind us of the important role the ship’s master has in ensuring the ships that ply our waters are operated safely and do not damage our marine environment.’

He adds that these ‘actions should not detract from the responsibility of the ship owner APL Singapore, insurer Steamship Mutual, and operator ANL who remain accountable for remediation of any impacts of this incident.’

According to Schwartz, the investigation findings so far ‘constitute a clear breach of a requirement under SOLAS (International Convention for the Safety of Life at Sea) to ensure that a ship and its equipment are maintained so as not to present a risk to the safety of the ship itself or anyone on board the ship.’

According to the authority, the ship shall remain detained until the deficiencies have been rectified by the owner and operator of the ship. The results of the inspection will be taken into account in the ongoing investigation into the circumstances of the AMSA accident.

‘While we do not want to pre-empt the outcomes of that investigation, it is already clear that the risk of this container loss occurring could have been reduced,’ says Schwartz.

AMSA conducted an aerial survey on Wednesday to locate the ship’s cargo. During this search, five containers were found, four of which were locked together. Some of the contents have now been washed ashore on the coastline of the Australian state of New South Wales. It mainly concerns medical equipment and mouth caps.

ANL has engaged contractors to undertake shoreline clean-up and retrieve some of the floating containers this week. Although welcomed by Schwartz, he expects the impacts of this incident ‘could take months, if not years to remediate.’

Because of this AMSA has placed an additional requirement on the owner of the ship under the Protection of the Seas Act, which must be met before the ship will be released from detention. Schwartz: ‘This action seeks financial security from the insurers in the order of 22 million US dollars. This provides a commitment that they will remediate all impacts of this incident. That 22 million covers estimated costs including that of a clean-up.’

This is the second time that the APL England has lost containers off the coast of Australia. The first time was in 2016, when 37 containers went ashore in the Great Australian Bight, south of the Australian mainland.