Last month, in the race to tackle climate change, DNV held its Singapore Energy Transition Conference with presentations and panel discussions for industry stakeholders and clean energy experts. Focusing on maritime decarbonization, the conference discussed what role Singapore can play in the green energy transition in Southeast Asia. As this thriving maritime hub intensifies its efforts to reduce and eventually eliminate greenhouse gas emissions, the conference was a place to explore what the energy transition journey looks like in 2022.

Remi Eriksen, Group President and CEO of DNV, believes that achieving net zero is politically and economically achievable – but it will take effort, he told the conference in a keynote address.

“Hydrogen, which is the lightest of elements, needs a heavy lift in order to reach the Paris Agreement. Much stronger policies are needed from governments. In this region, particularly with Singapore as a major bunkering hub today, there are huge opportunities for new fuels like ammonia, synthetic methanol, and hydrogen in its purest form,” Eriksen said. “As a high-income country, Singapore must be a catalyst for change in this region. We admire [Deputy Prime Minister and Minister of Finance] Lawrence Wong’s commitment to achieving net-zero by 2050.”

Drawing on DNV’s Energy Transition Outlook, Eriksen predicted that the world’s energy consumption is headed for a rapid transition from an 80/20 split (80 percent fossil / 20 percent non-fossil) to a 50/50 split by 2050. However, achieving net-zero by midcentury may be out of reach without further action.

“It will not be fast enough to meet the Paris Agreement, [and] the earth is heading towards 2.3° C of warming above pre-industrial levels,” Eriksen cautioned.

He suggested that to get the world’s climate ambitions on track, Europe and the United States need to achieve net-zero by 2040, then become net-negative by finding ways to absorb carbon from the atmosphere.

For Southeast Asia’s pathway to net-zero, Eriksen suggests that bringing the region down from its 2019 emissions rate of 1.7 gigatons of CO2 per year will require rapid penetration of renewables and reduction of fossil fuel use. He believes this will need to be driven by much higher carbon pricing and a ban on internal combustion engine cars by 2040. 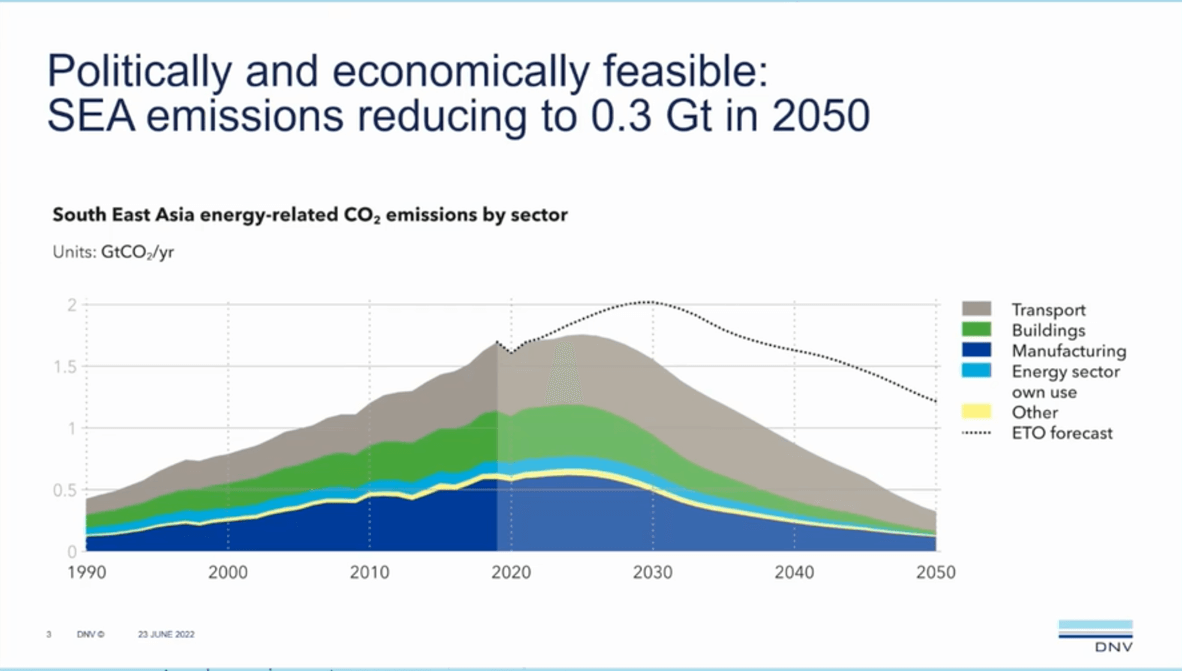 Eriksen admits that it will be hard to chase fossil fuels entirely out of the global energy mix in less than thirty years, given the demand for oil in industry and transportation. To address this, DNV is making efforts in carbon capture and storage (CCS), direct air capture, and nature-based solutions. Beyond 2050, once fossil fuels are fully eliminated, DNV sees the ideal energy mix as 70 percent direct electrification via renewables; 20 percent indirect electrification from green hydrogen and hydrogen-derived products; and 10 percent biofuels. Hydrogen will be critical for decarbonizing hard-to-abate sectors like high-heat industrial processes, shipping, trucking, and aviation.

To make enough hydrogen to supply just five percent of the global energy mix, an estimated $7 trillion of investment would be needed by 2050. However, three times more hydrogen – enough for 15 percent of world energy demand – is required to reach net-zero by 2050. That’s an additional 90 million tonnes, equal to the total amount of “grey” hydrogen produced today for industrial and agricultural uses. The challenge is to clean up the world’s hydrogen supply chain and simultaneously double its size to support new uses.

Hydrogen will be critical for shipping. In the 2030s and beyond, Eriksen predicts that ammonia made from green hydrogen will become the industry’s low-carbon fuel of choice. Therefore, ammonia production, storage, and bunkering will hold strategic importance for Singapore, the world’s leading bunkering hub.

“Hydrogen, the lightest substance, needs a heavy lift. Dramatic and urgent changes in all energy value chains are necessary through much smarter end-use enabled through digitalization. For this to happen, we require stronger policies for carbon pricing, subsidies, tough mandates, and bans. There is much work to be done and much to be discussed,” he concluded.

Though the net-zero goals are two to three decades away, and there will be unpredictable changes in technology, finance, politics, and public will over the intervening years, it is nonetheless inspiring to see that a common goal and effort of a cleaner planet is uniting the industry. Singapore has chosen to become a first mover in the race to decarbonize and digitalize the maritime and energy sectors. The “Little Red Dot” city-state is taking drastic efforts to show leadership in the rapidly shifting global landscape, and the industry and the region will closely examine Singapore’s moves.