Trading worldwide without electronic tools is no longer an option, young navigators and crew are switched on to digital technology and they want to have this new technology at their fingertips rather than the messy, slow and labour and paper-intensive methods of the past.

Tor Svanes, the founder and CEO of NAVTOR, believes that electronic chart and display information systems (ECDIS) is now a must have navigational tool in the modern era.

ECDIS has become the modus operandi on all ships, even those working on vessels that are not so modern.

“Navigating the future of shipping is crucial and young navigators no longer want to use paper charts, they are time consuming and far less accurate than their electronic counterparts,” explained Svanes.

According to Svanes, modern ECDIS systems overlaid with passage planning, regulatory information and weather reports, among other things is far easier operationally for crew. Svanes accepts that in the beginning there were teething problems, but he adds, “There is very little negativity about ECDIS these days, it has more integration with other systems and other equipment while updating charts with other data is a simple download.”That means that systems are always up to date and with modern systems the standardization of the display is simple, believes Svanes. What is more with new displays all reports can be available in one window. 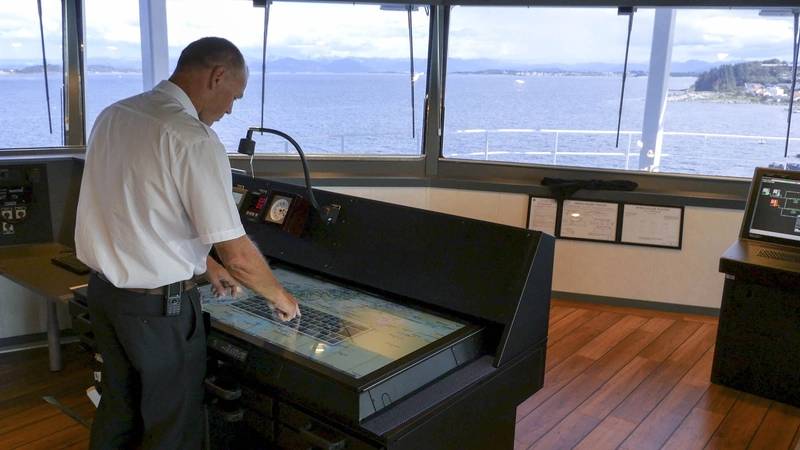 There won’t be any “backwards regulation” says Svanes but operators will need a system that complies with the new standard. And that will offer charts with more data and more detail, finer scale and more accurate, clearer displays.

What is more is that new chart displays will have the capability of displaying new regulations or regional regulations on screen allowing crew to plan a voyage with accuracy and knowledge of the weather conditions and the different regulatory regimes it will be sailing into.

A significant example is the latest offering from the International Maritime Organization (IMO) which introduced the IMO 2020 sulfur cap on 1 January 2020. Following the sulfur regulation there will be a regulation on the carriage of HFO, ballast regulations will be in place and a raft of decarbonization measures expected in the near future.

Other more regional regulations, such as the discussions over a new Mediterranean emissions control area (ECA), which have started the process for an all Mediterranean agreement to match those in the Baltic and the US, and it is these regional rules that make the regulatory map complex for vessel operators.

In addition to the international and regional rules there are an increasing number of port rules, these regulations are very localized and can vary widely, meaning masters have a tough time knowing which regulations apply at the various destinations to which they are travelling, with a number of ports called on any particular voyage.

“Navigating the future in shipping necessarily requires the industry to navigate away from its old operational measures and into a digital realm that is developing fast, and is fast developing the maritime sector,” said Svanes. Photo: Navtor

It is important for masters to be aware of local regulations. For example Port Everglades in the U.S. prohibits the discharge of ballast water, including the discharge of treated ballast water within the port. Whereas in Abu Dhabi, in the United Arab Emirates, above the water line hull cleaning and painting is prohibited as is boiler and economizer blow down, grey water discharge and underwater hull cleaning.

Failure to meet these complex regulations can be costly with severe fines, particularly in the EU and US waters, the need for clarity is real. NAVTOR’s Memorandum of Understanding (MoU) that it signed with Total Marine Solutions (TMS) offers owners and operators the kind of clarity that is needed to avoid falling foul of regulatory authorities.

Complex regulations often require advanced and costly mitigation technologies such as ballast water treatment systems or scrubbers, or even just low sulphur fuel where crew will need to test blends, make sure that tanks are cleaned and that the switch to a more expensive fuel is safe.

As the regulations change masters need to know which rules apply in each region and what mitigating actions need to be implemented to make certain that the vessel that they are operating remains compliant in all jurisdictions.

TMS launched its Ocean Guardian software in 2017 and it is designed to offer advice to crew and simplify the regulatory requirements as the ship heads into new regional jurisdictions, pertaining to port restrictions as well as mandatory rules on emissions and ballast water, so that the crew are prepared for what lies ahead.

Alexandra Anagnostis-Irons, President of TMS, said, ““This kind of collaboration – with expert partners leveraging each other’s skills and technology – is the way forward for an increasingly demanding maritime industry.”
In offering an e-navigation system with regulatory updates NAVTOR MD Tor Svanes believes that the most pressing issue for the service provider here is to make certain that all the information is correct and is up to date.

Gaute Fossmark, the environmental officer at NAVTOR, believes that this is a crucial issue for the combined systems. “Using data supplied by TMS the updating of changes to regulations is fully automatic, so that the customer does not need to worry about updates to the software, they see no updates,” he said.

TMS’s technical department makes certain that all data is harvested and updates its systems on a bi-weekly basis, while NAVTOR updates its electronic navigation chart (ENC) every week.

Fossmark believes that the regulatory regime is becoming increasingly complex with new rules applied at ports, “regional and port regulations are the hardest to get hold of,” according to Fossmark, with special rules applied by some ports for items such as waste management.
These changes offer substantial cultural and work-related changes for crew, but the biggest change so far has been the switch to ECDIS from paper charts. The next move will be an upgrade to the systems expected in 2024 which will see higher definition charts and better software.

“Navigating the future in shipping necessarily requires the industry to navigate away from its old operational measures and into a digital realm that is developing fast, and is fast developing the maritime sector,” concluded Svanes.