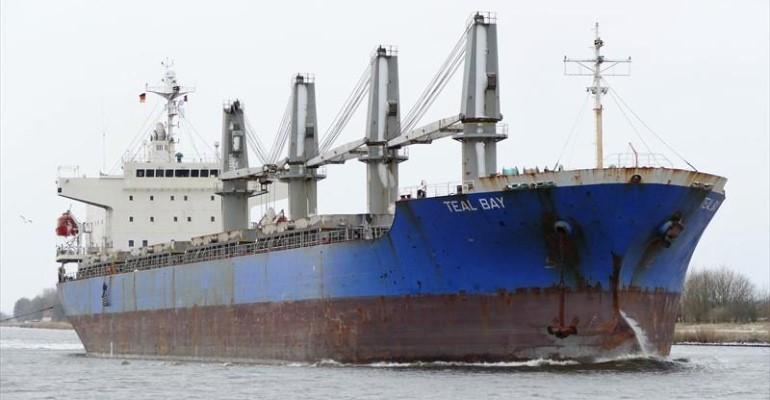 The Chief Officer of Teal Bay was struck on the head by a tensioned mooring line when it sprang from an open roller fairlead.

The incident happened at Kavkaz anchorage when Teal Bay was loading grain from Kavkaz V in a ship-to-ship transfer; Kavkaz V was at anchor with Teal Bay alongside.

A mooring line was being used to pull Teal Bay forward and was therefore under significant tension, but the STS transfer had created a difference in height (freeboard) between the two vessels. The vessels’ freeboards were similar when loading start, but as it progressed Teal Bay dropped lower relative to Kavkaz V creating an upward lead angle on the mooring line.

KavKaz V’s deck was around 8 m higher than Teal Bay’s, and as the line had been secured through an open fairlead roller it sprang from the roller and struck the chief officer as it snapped tight. The Chief Officer was standing in a hazardous area close to the mooring line, and was struck in the head, falling unconscious to the deck.

After some delay in securing evacuation for the chief officer, he was pronounced dead by a paramedic at 0045 aboard a tugboat in the port of Taman.

“A postmortem examination determined he had sufered closed blunt force trauma to the head, traumatic swelling of the brain and a brain haemorrhage,” said the report.

“Chief Officer, Yuriy Maslov, was a 54-year-old experienced seafarer and had been with the company for over 20 years. He was wearing shorts, a T-shirt, safety boots, gloves and a hard hat.”

In its conclusions, MAIB said that the number of crew assigned to carry out the warping operation was insufficient and almost certainly influenced the Chief Officer’s decision, which went unchallenged, to stand in a hazardous area.  Ahead of the incident, the master had decided not to wake the of watch crew to assist, as this would disrupt their hours of rest.

MAIB also found that crew unfamiliarity with STS transfers and a lack of available time led to insufficient planning for the mooring and warping.

“Despite the crew’s efforts and the assistance of the tug Dobrynya, it took over 2 hours for the casualty to be seen by a medical professional. Given the severity of his injuries, it is unknown whether the delays in the Chief Officer receiving medical attention had any bearing on his death; however, the lack of co-ordination by the parties involved in organising the medical response created delays that lessened his chances of survival,” said the report.

MAIB has recommended that Isle of Man Ship Registry distribute the lessons from the report to owners and operators on its register. The UK Maritime and Coastguard Agency is set to issue guidance on the use of open fairleads.

• Commissioned and overseen the production of a human factors analysis of the accident.

• Sent a fleetwide safety alert to highlight the safety issues raised by this accident.

• Issued a work instruction setting out a plan to remove open fairleads from the fleet and replace them with a closed type or universal type of fairlead and directed managers to make allowance for this within the dry dock specification for vessels scheduled to dry dock.

• Reviewed SMS procedures to include guidance on STS operations for bulk carriers with a specific bulk carrier checklist and ofce involvement in the STS approval process.

• Amended the SMS to include detailed guidance on warping operations.