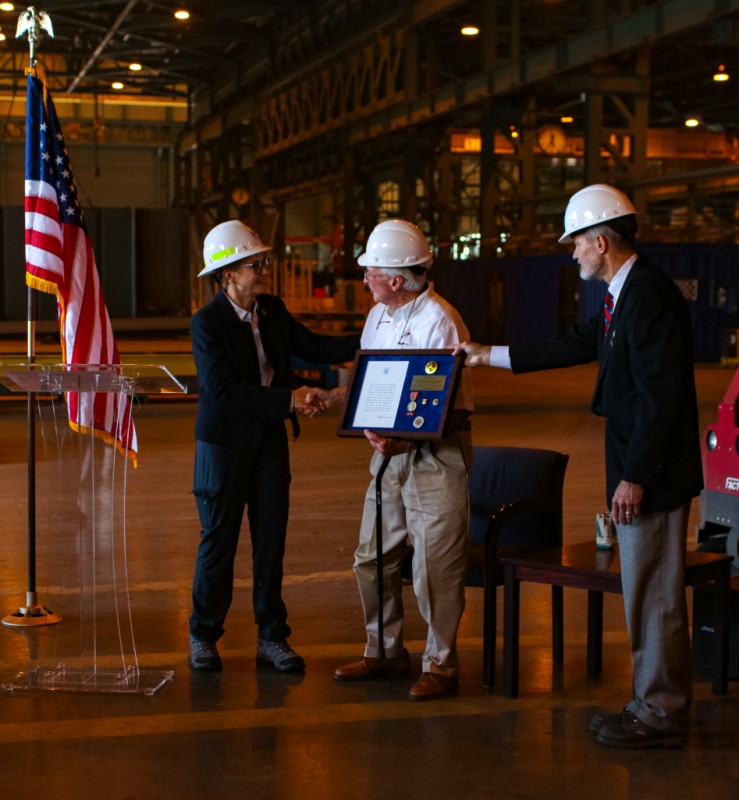 This event marks another major construction milestone for the NSMV program, designed to provide a purpose-built, state-of-the-art training platform for state maritime academies in New York Massachusetts, Maine, Texas, and California, respectively. In addition to providing world-class training for America’s future mariners, these five NSMVs will be available to support humanitarian assistance and disaster relief missions in times of need.

As a youngster, Mr. Reilly was always interested in going to sea. His father had emigrated from Belfast, Northern Ireland, where he had been a shipyard worker at the Harland & Wolff Shipyard responsible for installing the watertight doors on the three renowned Olympic-class ocean liners – RMS Olympic, RMS Titanic, and RMS Britannic.

Mr. Reilly enlisted in the U.S. Maritime Service in September 1943, as a 17-year-old high school sophomore. After three months of training to be an Ordinary Seaman and an additional three months of basic training at the U.S. Merchant Marine Academy at Kings Point, Mr. Reilly shipped out on the SS Woodlake, a brand new T-2 tanker headed for Avonmouth, England with aviation gas to support the war effort.

Mr. Reilly went on to sail a replenishment ship during the Korean War and eventually retired from the Naval Reserve in 1971, as a Lieutenant Commander.