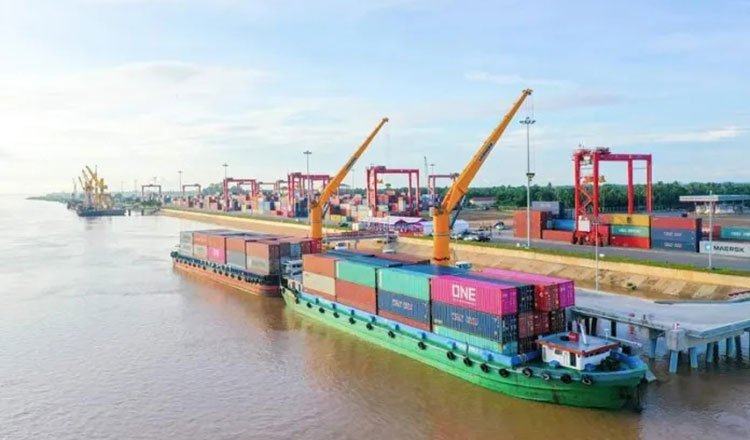 State-owned Phnom Penh Autonomous Port has reported nearly $20 million in revenue for the first half of this year, increasing $4.46 million or 29 percent from $15 million for the same period last year, according to a company statement.

In the second quarter of this year, the port’s four categories of revenue rose by 43 percent to $10.27 million compared to $7.2 million for the same quarter in the previous year, driven by port operations, port authority and other income that surged by 49 percent, 36 percent and 4 percent, respectively.

The pace of revenue increase in June this year alone was similar to the rising pace of revenue in the first half as a whole — 28 percent driven by port operations, port authority and other income, it said.
The port’s report showed that its business operations grew in the first quarter, especially cargo vessel transits that rose by 117.38 percent, while local passenger transportation boats surged by 550.03 percent.
The cargo vessels that transit PPAP, including Cambodian and foreign vessels, barges, oil vessels and tankers, while in-out local passenger boats operate two-way Phnom Penh-Siem Reap with the number of passengers increasing 182.70 percent to 15,789 from 5,585 passengers.

The report added that container, general and oil cargoes have declined by 3.27 percent, while cargo handling at the port dropped by 1.54 percent.

Meanwhile, the Cambodia Securities Exchange (CSX) reported that the price of PPAP stock has fallen by 1.92 percent to 15,626 riels per share on average on the main board in the second quarter of this year, while the stock’s trading value has dropped by nearly 13 percent to 1,046 million riels from 1,202 million riels.

PPAP stock’s trading volume — the number of shares traded on the exchange — has dropped by 19.39 percent to 66,453 shares in the April-June of this year from 82,440 shares in the same period of last year, according to a CSX report.

In March, a groundbreaking ceremony for the cross-docking and cold storage facility was carried out at Container Terminal LM17 on National Road No. 1. It was the first step of the port’s development project. The existence of a cold warehouse will help it to meet the customer needs for storing, packaging, consolidating or deconsolidation, and stuffing or unstuffing cargoes for export and import via the port.