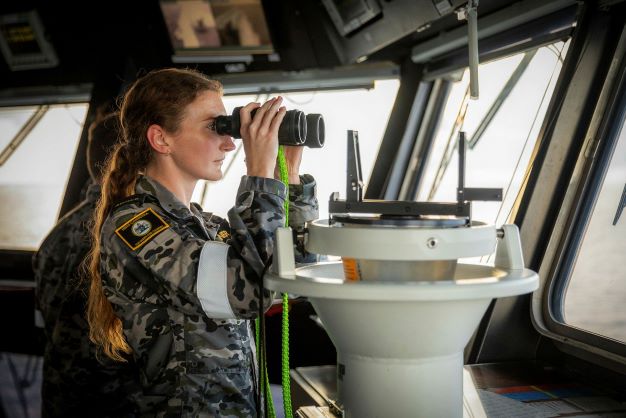 At the recent Quad leaders’ summit in Tokyo, Australia, India, Japan and the US launched the Indo-Pacific Partnership for Maritime Domain Awareness, an initiative aimed at strengthening maritime security in the region. Apart from one very useful explainer and David Brewster’s excellent recent analysis, the announcement has been largely overlooked.

The objective is for regional countries to buy commercially available satellite tracking data of ships and combine it with data gathered from sources such as automatic identification systems, which broadcast a ship’s name, location, course, speed and other data.

‘This initiative will transform the ability of partners in the Pacific Islands, Southeast Asia, and the Indian Ocean region to fully monitor the waters on their shores and, in turn, to uphold a free and open Indo-Pacific,’ a White House fact sheet noted.

However, ‘fully’ is somewhat of an overstatement; it would be more realistic to say that it would provide another means for countries to monitor their waters. It would provide unclassified data, and its principal customers would be civil maritime law enforcement agencies, especially coastguards and maritime police.

As Brewster explained, one of the biggest challenges for small countries in the region is tracking suspected illegal fishing vessels that ‘go dark’ by switching off their automatic identification systems. That’s not possible with vessel monitoring systems: if they’re installed as a term of licence, they can’t be tampered with in the same way, and if they’re turned off they send a notice. Automatic identification systems have no such functionality, since they’re designed for safety of navigation and not for monitoring. The Quad initiative would therefore be another very useful data source for agencies cracking down on illegal fishing and a valuable feed for more efficient enforcement activities using surveillance aircraft and surface vessels.

In building the system, much can be learned from the Pacific, where the island states face a pressing need to understand more about what’s happening in the waters that surround them. The small island nations have developed sophisticated platforms like the fisheries information management system, which houses all industry, observer, registry, licence, compliance, catch documentation, certification, vessel monitoring and other data and manages it on a single secure platform. From this base, the fishery can be sustainably managed and (where agreed) data fields are forwarded in near real time back to sovereign nations; fishing and market states; and industry, science, surveillance, compliance and regional fisheries bodies such as the Forum Fisheries Agency surveillance centre in Solomon Islands. It holds a common operating picture based on data provided through member states’ vessel monitoring systems, some high-seas data from the Western Central Pacific Fisheries Commission, and data from ships’ automatic identification systems and long-range tracking and identification systems.

One area in which the Quad partners should consider applications for the new system is the Indo-Pacific’s southern flank: the Southern Ocean and Antarctica. The Quad countries are all active Antarctic players. But the southern Indo-Pacific boundary often gets neglected in discussions.

The ship-tracking data from the plethora of satellites in low-earth orbit (particularly polar orbits) is just as applicable to the Southern Ocean as it is to the high latitudes of the Indian and Pacific Oceans. There’s no significant technical reason why this data wouldn’t be available to go into the shared analysis and distribution network that’s envisaged through the Quad.

It would be worth the Quad partners thinking about three potential zones of the Southern Ocean where the system might operate: the temperate region, north of the polar front and up to the continental margins of Australia, South Africa and South America; the sub-Antarctic region, north of 60°S and south of the polar front; and the Antarctic Treaty Area, south of 60°S.

For the first zone, leveraging the system into that area makes good sense. It would be of obvious military, fisheries and search-and-rescue benefit to all states bordering the Southern Ocean.

For the second zone, there may be some concerns about extending it into the area protected under the Convention on the Conservation of Antarctic Marine Living Resources, albeit above 60°S. At the moment, the convention doesn’t expressly provide for aerial inspections (although the Antarctic Treaty does under Article VII), so there’s some argument among members about whether data collected in this way (or further data collected by satellite) can be used to support inspections under the convention.

That was the issue with the Russian vessel FV Palmer, which was spotted by a New Zealand military aircraft while apparently fishing in an area closed to fishing, some 800 nautical miles from where the vessel was officially reported to be. Both Russia and China disputed that data collected from aerial patrols was allowable under the convention’s inspection system. Information collected from the Quad system would likely face similar resistance from these states if someone attempted to use it as evidence of an inspection under the convention. But at the very least, the data could be used as intelligence to support the well-established practice of vessel-based inspection under the convention.

For the third zone, there’s the possibility of negative perceptions in some states arising from the non-militarisation provisions in Article 1 of the Antarctic Treaty. Extending the system into the Antarctic Treaty Area could generate concerns that the Quad was somehow ‘securitising’ the region and acting against the spirit of the treaty’s demilitarisation provisions.

But the counterpoint to those concerns is that maritime domain awareness for civilian purposes is a ‘peaceful use’. The Antarctic Treaty inspection regime expressly allows for ‘aerial inspection’ of stations and ships in the treaty area. That might arguably include satellite inspection from space.

It’s not clear yet who will put the system together and provide intelligence to regional information centres and national law maritime enforcement authorities. Presumably Maritime Border Command—a multi-agency taskforce in the Australian Border Force that coordinates surveillance of and responses to civil maritime threats, such as illegal fishing—will play a role.

It may turn out that there are just too many cooks in the kitchen. But in theory, the Indo-Pacific Partnership for Maritime Domain Awareness is a promising idea to bolster the maritime security of the region, including the Southern Ocean, by creating a networked real-time picture that allows for a shared understanding of threats and developments in the maritime domain.

While not a complete solution in its own right, the data from the system, correlated appropriately and delivered in a timely manner, will be another valuable input to the many other initiatives seeking to provide more effective maritime domain awareness in the region.