Petrofin Research says the turnaround was assisted by continuing central banks’ monetary easing, low interest rates and a resurgence of demand for goods and commodities leading to increased congestion and fleet inefficiency.

As a result of these developments, charter rates across most sectors (except for tankers) shot up, by 50% for LNGs, up to 185% for dry bulk and multi-fold for containers according to Clarkson’s statistics. Vessel values followed suit, whilst scrapping decelerated. All in all, a remarkable turnaround, says Ted Petropoulos, head of Petrofin Research.

“Banks, under these favourable conditions and prospects, faced increased demand for loans, as well as competition from other non-banking lenders,” says Petroloulos.

Within the top 40, twenty-one banks are based in Europe, 16 are Asian/Australia based, and three North American based. 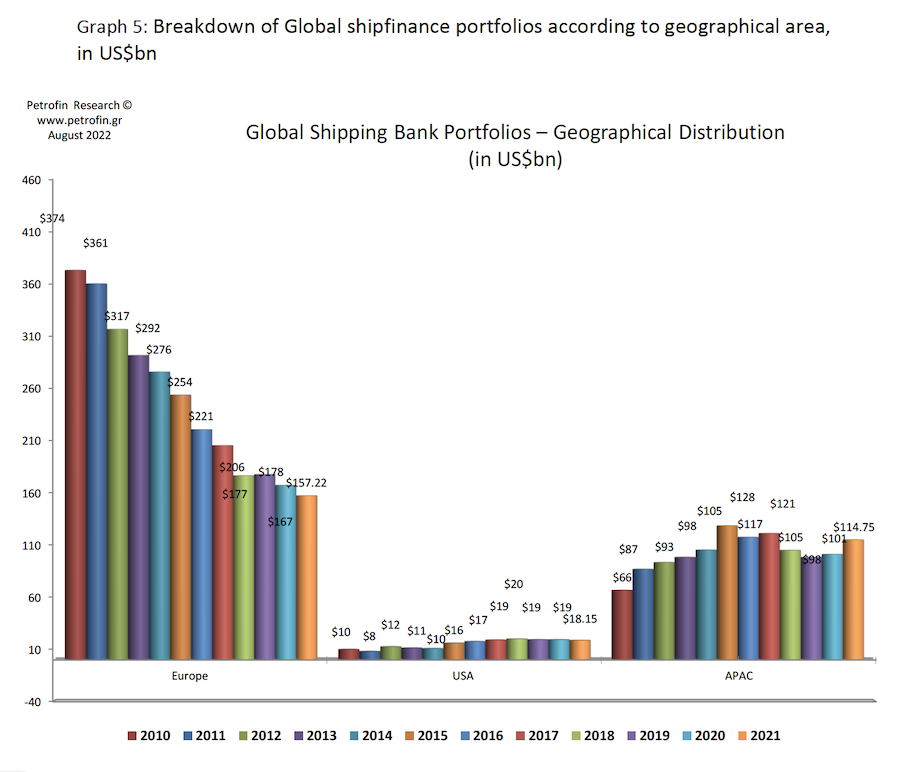 Within Europe, the big decline continues by German banks although the trend has slowed. Greek banks showed a year-on-year growth of 14.2 %, whilst Scandinavian banks continued their overall decline de-emphasising lending in favour of use of their services to shipping.

Relative newcomers / small banks such as Bank of Cyprus, Hellenic Bank of Cyprus, Norway’s Pareto, the US’ M&M bank, grew during 2021 and provided plurality to the available sources of bank finance.

Petrofin Research, said it can provide “a cautious, indicative figure for global ship finance, including all forms of lending, leasing and alternative providers, of approx. $500bn”.

“The total global bank lending of all banks, including local banks, amounts to approx. $340bn, or some two-thirds of the global ship finance total,” said Petrofin.

It warns however, there is increasing evidence that due to the Russian invasion of Ukraine, together with the high energy prices, geographical sanctions, higher interest rates, slowdown in global growth and concerns over an incoming recession, bank lending in 2022 has been disrupted as caution prevails amongst banks.

Further, the Chinese selective lockdowns and economic slowdown has added to the concerns and is having a temporary impact on Chinese leasing as well.

nextTow for “Toxic” Aircraft Carrier Reverses Course Back to Brazil