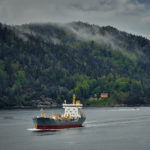 The ship recycling market has remained in a difficult state with very few demolition candidates. In its latest weekly report, shipbroker Clarkson Platou Hellas said that “there was more upheaval to report this week, this time coming from Bangladesh, where despite price levels showing signs of improving, the Bangladeshi Government introduced new restrictions to limit the outgoing volume of U.S. Dollars for ‘essential’ purchases only. This will now pose serious questions concerning these improved levels for any available tonnage in the foreseeable future. As such, the government announced that any Letter of Credit exceeding USD 5.0 million must be approved by the Central State Bank for opening. In addition, reports this week suggest that the Government of Bangladesh has sought a USD 4.5 billion loan from the International Monetary Fund as it seeks assistance to cope with the mounting pressure on their economy. It is understood the Bangladeshi Taka has devalued by about 20 pct against the U.S. Dollar over the last few months weakening the country’s finances. We are already hearing of cash buyers facing difficulties reselling any larger LDT tonnage that they have in hand due to these restraints and it is expected that this will continue for some time, thus the question will be, whether Bangladesh will be aggressive to purchase any large LDT vessel that comes into the market. Concerning times indeed for the local Chattogram market! Elsewhere, India is seemingly the more stable and competitive market, but again the dwindling of tonnage being circulated is a cause for concern for the domestic industry. Across their border, the recyclers in Pakistan look set to take a position on the side-lines as their price levels remain far less competitive than their counterparts in India and even Bangladesh”, the shipbroker concluded.

Meanwhile, Allied Shipbroking added this week that “the ship recycling market appears to have noted another slight step back, with offered prices levels across the Indian Sub-Continent having noted another correction as of this past week. Activity continues to remain at sluggish levels, though the slakc in buying appetite is only one half of the equation at hand. We are still seeing a very small number of demo candidates coming to market these past few weeks, while given the lower price levels on offer this trend is likely to continue to hold for the remainder of the summer period. In the separate demo destinations and more specifically that of Bangladesh, conditions for local breakers seem to be deteriorating further, with the local economy in a tight squeeze and local banks likely to find it difficult to support the market under these conditions. 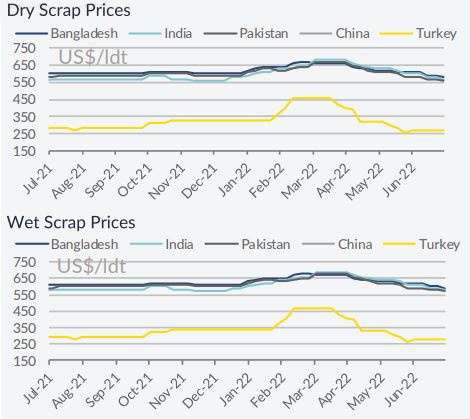 Things have been holding slightly better in India, though with lack of strong competition from Bangladesh and Pakistan and with the Indian Rupee struggling to hold steady, it looks as though all appetite amongst buyers to give out any bullish offers have evaporated for the time being. Pakistan has also seen increasing levels of difficulties emerge. Facing both economic and political uncertainty at home, local breakers are backing down from any strong offers, while the increased monsoon rains of late are also causing disruptions in operations for the time being”.

In a separate note this week, GMS , the world’s leading cash buyer of ships, said that “fears and concerns across the sub-continent recycling markets continue to grow as local currencies across all major ship-recycling destinations continue to worryingly depreciate by the day and some even tougher restrictions reportedly set in place on the opening of fresh Letters of Credit (L/Cs) in Bangladesh this week, as the foreign currency crisis in the country deepens further. In fact, the currencies have been such a source of frustration for the ship recycling community that the U.S. Dollar transactions are getting uncontrollably out of hand. The Pakistani Rupee has depreciated by a whopping 44% since the start of the year and shows few signs of stabilizing just yet. Bangladesh too has not escaped the forex collapse and remains in a perilous state. In fact, this week, the Bangladeshi government has applied to the IMF for a USD 4.5 Billion bailout, with the economic crisis continuing to eviscerate ‘non-essential’ large dollar value international trade.

Moreover, on the Bangladeshi L/C front, any L/C over USD 3 million now has to be approved by the Central State Bank – this is down from the USD 5 million limit imposed just last week and illustrates just how grave the situation is locally. Inflation in Bangladesh too is the highest it has been for a decade at about 7.50% whilst the Bangladesh Taka has depreciated by about 11.5% in the year to date in further troubling signs. India, ironically (given it’s volatile steel plate prices), remains the strongest and most resilient economy, but it is hardly encouraging to see competing markets in such dire straits, with talks plaguing the region that a similar collapse as that seen recently in Sri Lanka could be a serious possibility for those under siege countries. Finally, in Turkey, the situation is mirroring the Pakistani market, with weakening steel plate prices and a currency that seems doggedly intent on breaching TRY 18 at some point. As such, ship recycling is taking a backseat to these far more prescient worries at the moment – with nearly no new sales at least troubling recyclers for the time being”, GMS concluded.
Nikos Roussanoglou, Hellenic Shipping News Worldwide