The UK MAIB has published a report on the death of a chief officer who was struck in the head by a tensioned mooring line aboard a bulker in 2021, finding that a short-handed operation and an unfamiliarity with the mooring arrangement contributed to his death.

On August 29, 2021, the bulker Teal Bay arrived at Kavkaz, Russia, to rendezvous with a transloading vessel and take on grain from small powered barges. With guidance from the local pilot, Teal Bay tied up with the geared bulker Kavkaz V on the Kavkaz’s port side. The crew had never made fast to another vessel of this size, nor had they conducted ship-to-ship loading operations in this manner before. They used a combination of three head lines, three stern lines, two bow spring lines and two stern spring lines. (Spring line naming conventions vary among maritime nations, and “stern spring line” refers here to an forward-leading spring line originating from the stern.)

The transloading operation got under way, and the crane operators aboard the Kavkaz V scooped up grain from small barges on Kavkaz’s starboard side, swung the cargo over the deck and over the port side, depositing it into Teal Bay’s holds. As the operation proceeded and her holds filled up, Teal Bay’s freeboard decreased. Over the course of the next day, her main deck level dropped to about 25 feet below the deck of the Kavkaz, and her mooring lines took on an upward lead.

At about 2220 on August 30, loading was nearly complete. The third officer aboard Kavkaz V asked Teal Bay to move ahead so that the crane operator could reach another part of Teal Bay’s hold. Teal Bay’s master decided to warp ahead, since this was a small move. He could have treated this as a full mooring operation per the SMS, but this would have meant waking up the off-watch crew to add more personnel on deck. He did not want to wake the crew, so he sent the chief mate to the stern and the third mate to the bow, each with one AB.

At about 2235, as the team on the bow slacked off their spring line, the AB on the stern spring line activated the winch to pull in and warp the ship ahead. The line was run through an open roller fairlead, and the chief mate was standing next to the fairlead near the deck edge, where he would have been able to watch and supervise the evolution. As soon as the line came under tension – with a vertical lead towards the Kavkaz’s higher main deck level – the line popped up and out of the roller fairlead and struck the chief mate in the head. He fell immediately unconscious to the deck. 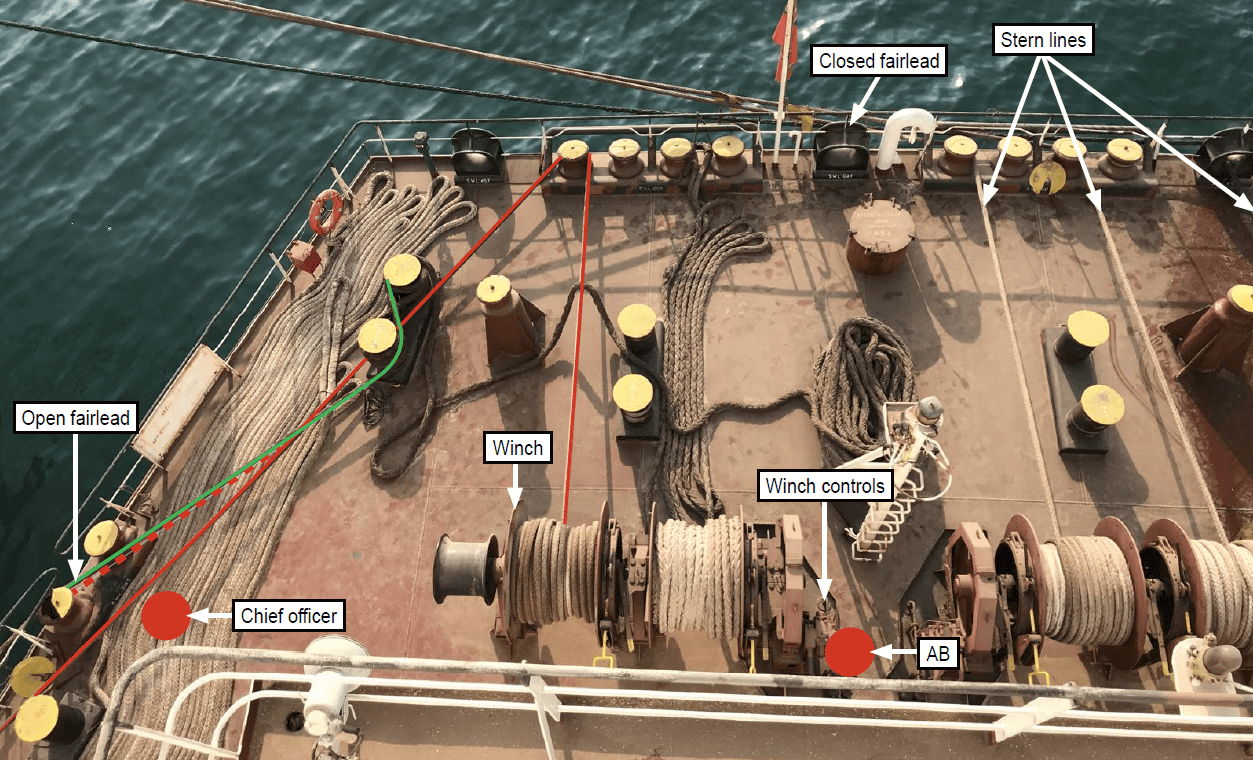 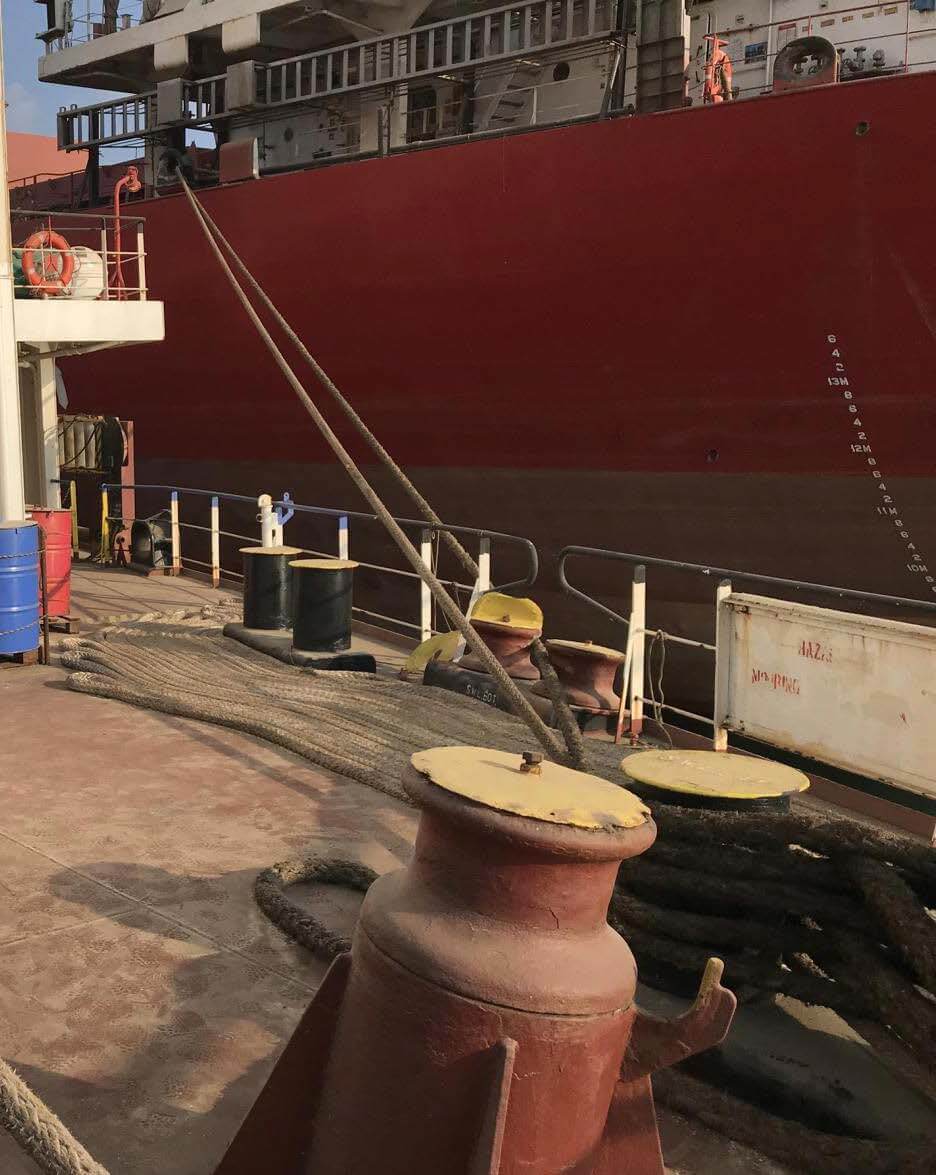 The local maritime rescue coordination center was contacted and Teal Bay’s second officer gave the chief mate first aid, including oxygen. The victim had a pulse and was breathing, and there were no outward signs of injury.

A tug arrived to evacuate the victim at 2316, but the crew would not take him aboard before receiving permission from the port. Alternate arrangements for a helicopter were discussed but none were available. The tug ultimately took the chief mate aboard, getting under way for shore at 2350. At this point, the officer’s pulse had weakened. By the time a paramedic met the tugboat at the pier at 0045, the chief mate had no vital signs.

An autopsy determined that he had died from a brain hemmorhage resulting from blunt force trauma.

Through its investigation, MAIB determined that the crew’s decision to run the line through an open roller fairlead, combined with the vertical lead from the deck of the Teal Bay to the deck of the Kavkaz, allowed the line to pop out of the fairlead when it came under tension. The appropriate choice would have been to select a closed roller fairlead; the crew may not have known this as they were unfamiliar with this particular mooring operation. No risk assessment was conducted before the evolution, and so the opportunity to identify this hazard was lost.

The short distance of the move and the desire to complete the loading operation quickly could have motivated the master to warp ahead without making a fuller assessment of the situation. As the captain did not bring out the crew for a full mooring operation, the chief mate was operating with fewer people on hand than he usually would have, and was tasked with supervising both the aft deck and the evolution as a whole. If the full crew had turned out, the chief mate would not have been on the stern.

The extra time taken up in making medevac arrangements reduced the officer’s chances of survival, MAIB determined, though it is impossible to know whether he would have survived even with prompt care.

Among other post-casualty recommendations, the shipmanager has been advised to remove all open fairleads from its fleet and replace them with closed or universal type fairleads, which will not release a line with an upward lead.