Six years ago, BW LPG embarked on a journey that would create the world’s largest fleet of LPG dual-fuel-powered very large gas carriers (VLGCs) when it began planning for compliance with the IMO 2020 0.50% sulphur cap. Like many shipowners, BW LPG had to weigh commercial and technical options regarding fuel choice, engine technology and refuelling availability, crew safety and training and vessel design.

“We quickly settled on LPG as the fuel type, which we strongly believe is the future fuel for the next generation of vessels,” BW LPG executive vice president technical and operations Pontus Berg explained in 2020. “Our initial design was for a newbuild, but we later converted that into a retrofit solution,” he said.

Mr Berg cited several factors in concluding that converting existing vessels to burn LPG was the best choice. “Operationally, LPG is cleaner and easier to manage than fuel oil or LNG. But in terms of bunkering, there are real savings to be made. We can bunker LPG while loading cargo, and this can save between four- and five-days bunkering time per year. Furthermore, bunkering directly at the loading terminal saves time and the additional costs of a bunkering barge.” With existing import and export terminals serving as bunkering hubs, and the possibility of performing ship-to-ship refuelling via small LPG carriers, this eliminates the ‘chicken and egg’ concerns that hamper the uptake of other alternative fuels”, he said.

As for choosing to retrofit rather than build new, Mr Berg pointed out that converting an existing vessel to LPG dual-fuel propulsion would significantly cut CO2 emissions and payback time.

“The construction of a new vessel generates about 70,000 tonnes of CO2, but taking a retrofit approach reduces this massively, down to about 2,000 tonnes. And while operating on LPG as opposed to fuel oil saves close to 5,000 tonnes of CO2 per year, the environmental payback for a newbuild is 15 years; for a retrofit that falls to less than six months,” he said.

“These vessels are not only making tangible reductions in carbon emissions, but also helping our bottom-line”

With its strategy in place, the Oslo-listed shipowner’s first steps on its decarbonisation journey were clear: a commitment to a pioneering retrofit project in partnership with MAN Energy Solutions and other maritime industry stakeholders that would see four of its VLGCs converted to burn LPG as a fuel.

The deal, announced publicly and to the trade press at a ceremony in Copenhagen in September 2018, coincided with the official launch of MAN Energy Solutions’ two-stroke, electronically controlled, Diesel-cycle, LPG dual-fuel ME-LGIP engine at the Danish engine designer’s research centre.

Two of those new LPG-burning engines, MAN B&W 6G60ME-LGIP Mk9.5, were destined for the world’s first two LPG dual-fuel-powered newbuild VLGCs ordered by Belgian shipowner Exmar for long-term charter to Equinor. The first of those, the 88,000-m3 Flanders Innovation, built to Lloyd’s Register class in China, was delivered by Jiangnan to the Nicolas Saverys-led Exmar in 2021. A new era of LPG-propelled gas carriers was born. 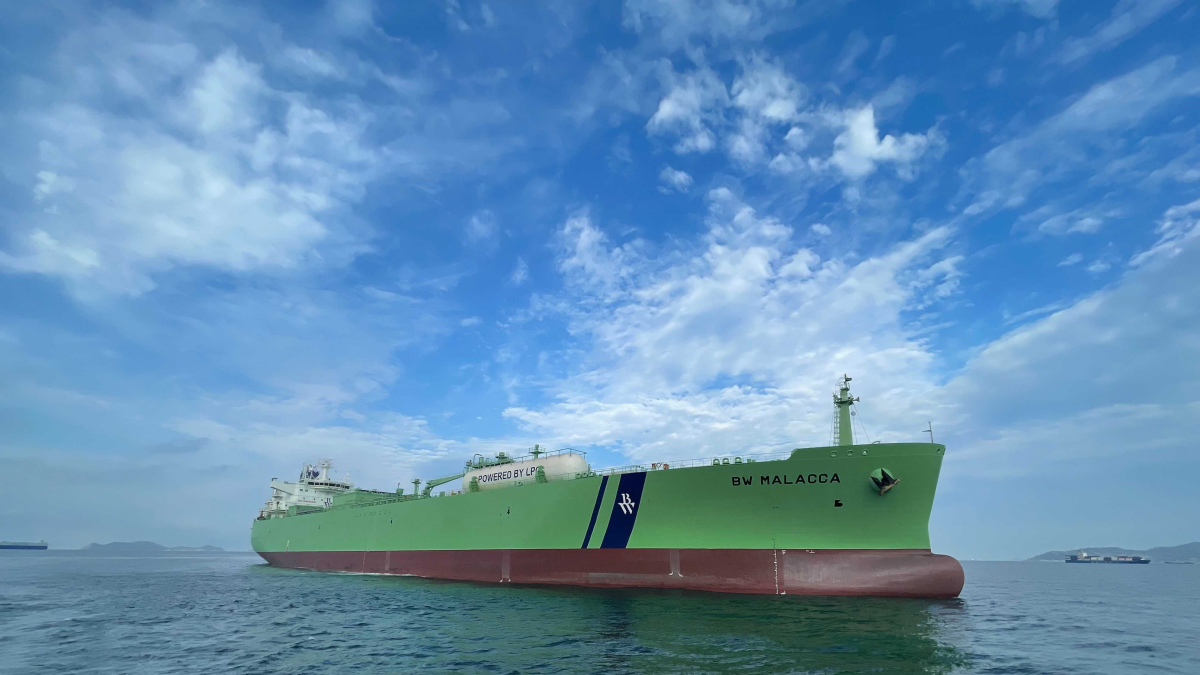 This era kicked off with the conversion in late-October 2020 of the main engine of BW LPG’s 2015-built LPG carrier BW Gemini, the first of the four VLGCs to be retrofitted for LPG propulsion.

Operational performance of the gas carrier proved the business case for LPG as a fuel; CO2 emissions were reduced by 17% as compared with marine gasoil on a well-to-wake basis, while SOx emissions were slashed by 97%, PM by 90% and NOx by 20%. Additionally, since LPG is methane free, methane slip from combustion is a non-factor.

Fuel consumption also improved. Using LPG as a marine fuel, the VLGC’s output efficiencies rose by around 10% against fuel oil, which in turn generated notable gains in total voyage fuel economics. This, along with other advantages, secured LPG’s position as a long-term, sustainable marine fuel in gas carriers.

Encouraged by the initial successful conversion of BW Gemini, BW LPG upped its commitment in 2020, earmarking an additional 11 new-generation VLGCs to burn LPG. This tipped its investment to US$130M.

Now one of the largest dual-fuel propulsion refit projects in history has wound down. With the redelivery of BW Malacca — the last of these 15 VLGCs to be converted — BW LPG completed the programme in May 2022.

As was the case in the previous 14 conversions, the ship’s MAN B&W 6G60ME-C9.2 type engine was retrofitted to a MAN B&W 6G60ME-C9.5-LGIP dual-fuel type, capable of operating on fuel oil and LPG. Conversion work also involved the installation of two 900 m3 deck fuel tanks, each weighing about 89 tonnes. Each of the 35 m-long tanks is made of low-temperature steel, encased in a thick insulation material. Wärtsilä Gas Solutions supplied the fuel gas supply systems for all 15 vessels. The newly converted VLGCs carry the DNV notation GF LPG.

The refit was carried out at Yiu Lian Dockyards in Shenzhen, China in conjunction with the gas carrier’s scheduled, five-year dry docking and under the supervision of MAN PrimeServ, MAN Energy Solutions’ after-sales division. BW Malacca has since passed sea trials.

“We could not have accomplished this ambitious project on our own”, said Mr Berg. “Our success lies in close collaboration with many experts in their field – MAN Energy Solutions and Yiu Lian Dockyards are two of many partners we thank for their support over the years.”

Mr Berg added: “Powered by LPG, these vessels are not only making tangible reductions in carbon emissions, but also helping our bottom-line in terms of savings on compliant fuel expenses in a high-cost supply situation”.

Added MAN PrimeServ senior vice president Michael Petersen: “As a low-carbon fuel, LPG is well on its way to becoming the new market standard in this segment. As we move towards a zero-carbon future amidst a strong, global push towards sustainability, these conversions showcase our dual-fuel engine portfolio that is future-proofed to handle whatever alternative fuels come to prominence in the decades ahead.”

With more than 120 orders, and 35 in service, the future for two-stroke LPG dual-fuel ME-LGIP engines appears set. Indeed, MAN Energy Solutions said the vast majority of current orders for LPG carriers over 30,000 m3 in capacity will be equipped with ME-LGIP technology, enabling these vessels to use their own cargo as fuel.