An alarm buzzes. The marine analytics software at the onshore Maritime Enforcement Agency’s Command and Control (C2) Centre has detected some suspicious movement off the port of Singapore. An oil tanker has shifted its bearings significantly and is charting a course that departs from its historical routes.

Concurrently, the automated tracking system onboard a coast guard vessel alerts its crew to the oil tanker’s movement – it is on a collision path with a container ship. The system then transmits live footage of the situation on the ground to the C2 Centre.

With the help of such valuable information, authorities immediately intercept the oil tanker in this hypothetical scenario, thwarting an attack by terrorists.

Such access to real-time intelligence gathered by AI technologies is vital. Authorities are able to gain a clear overview of such maritime situations, enabling them to make informed and swift decisions.

This is a far-reaching update from rudimentary systems that rely largely on manual labour, as they tend to be inadequate due to the limited endurance and surveillance coverage of physical crews.

Compare this with traditional systems that relied largely on human efforts to identify such potentially catastrophic situations, and usually fell short, mainly due to human beings’ limited endurance and fallible nature.

The difference is automation, which is key to combating maritime security threats such as illegal fishing, drug trafficking, piracy and terrorism. The ability to analyse reams of data in real time is critical, especially in emergencies.

Helping the maritime community steer towards safer waters is our AGILTM Maritime Situational Awareness System (MSAS) that integrates surveillance information from both onshore and offshore assets to enhance security operations at the sea. 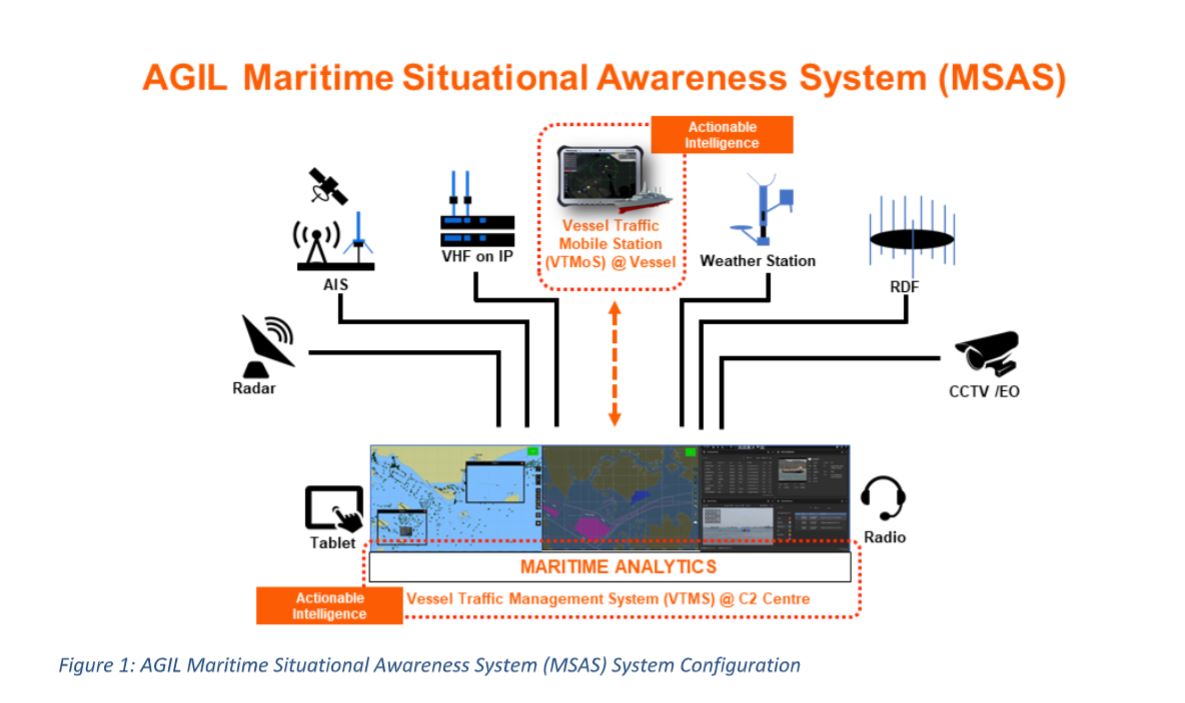 Eyes on the Sea

The first component of the MSAS is the Vessel Traffic Mobile Station (VTMoS), which integrates with a vessel’s existing navigation system. Once installed on either a manned or unmanned vessel, the VTMoS transforms the vessel into a mobile surveillance centre, serving as “eyes” on the sea. 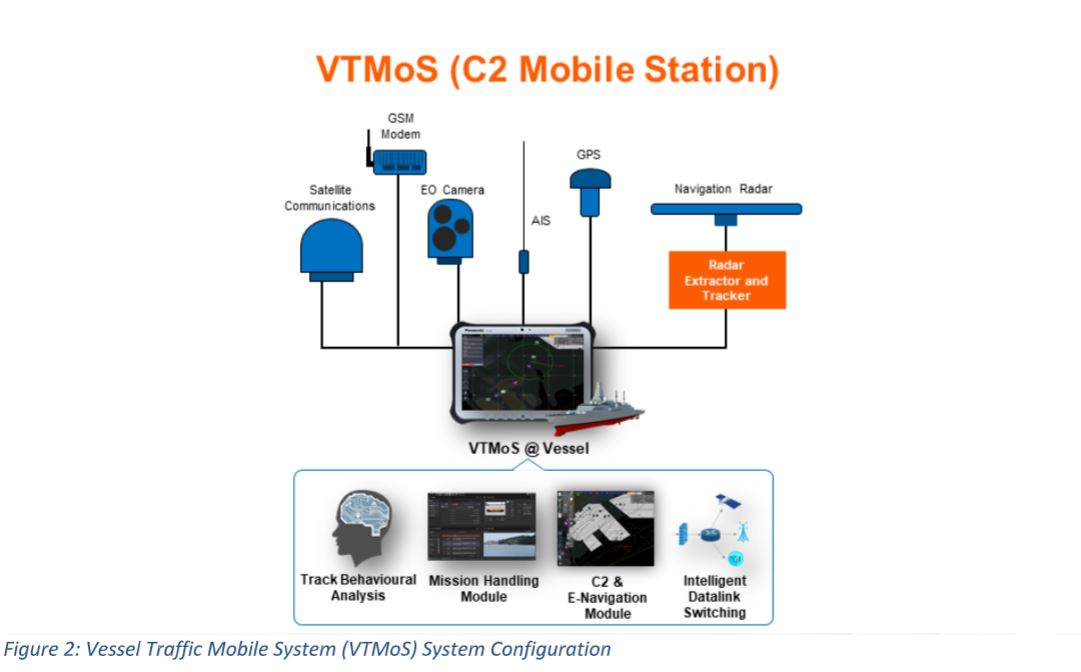 The enhanced surveillance coverage is attributed to the system’s Radar Extractor and Tracker technology, which augments the vessel’s navigational radar with the detection capabilities equivalent to a high-performance surveillance radar. As a result, even smaller targets that usually escape notice, such as rubber boats commonly used in illegal operations, can now be detected.

These mobile centres extend the surveillance coverage beyond the range of coastal radars, and the coverage can be easily scaled by increasing one’s fleet size.

For instance, loitering, shadowing of another vessel, sudden changes in a vessel’s speed and direction, and collision courses are anomalous movements that indicate a potential security threat and trigger alarms.

In ensuring efficient operational communication between sea and shore, the VTMoS’ C2 and e-Navigation ready Module offers a one-stop platform – the navigation officer can transmit on-site intelligence to and receive instructions from the C2 Centre simultaneously. This eliminates the hassle of switching between different module stations and also saves space, which is especially important for small vessels.

Besides offshore assets that provide valuable intelligence, onshore assets at the C2 Centre also strengthen maritime security and surveillance through the use of maritime analytics.

The onshore C2 Centre is equipped with the Vessel Traffic Management System (VTMS), an in-house vessel tracking system with embedded data analytics that serves as its brain. The system comes with a robust algorithm that has undergone rigorous testing in the busy maritime ports of Singapore and Hong Kong. 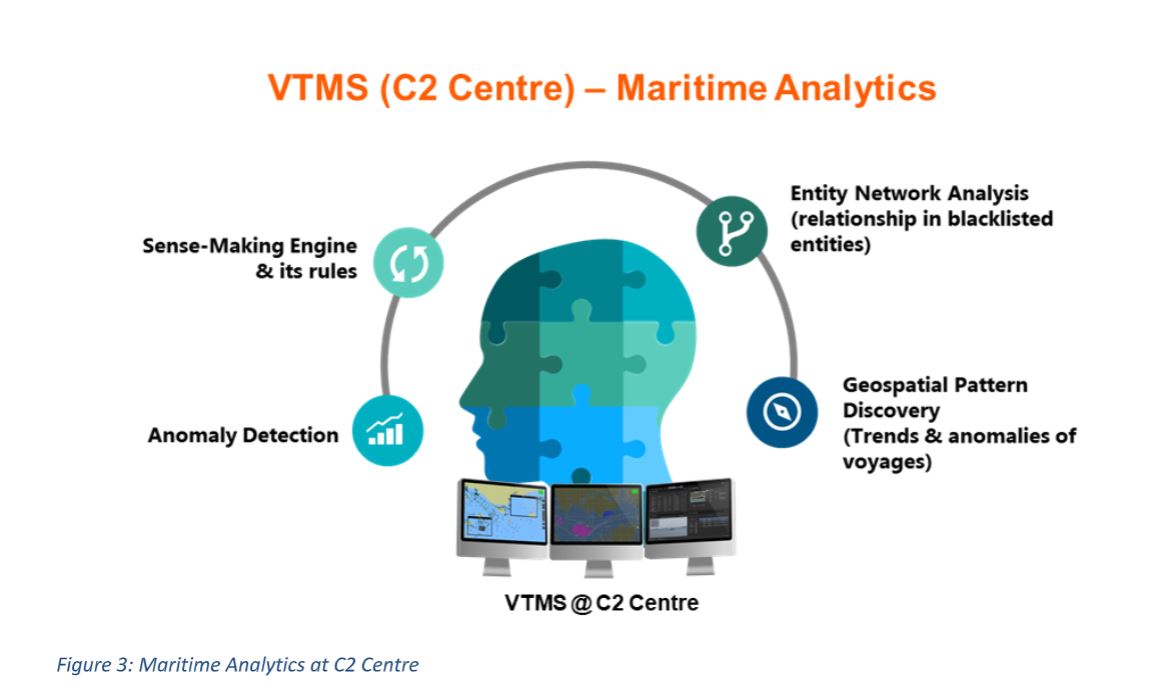 The VTMS has an Anomaly Detection and Sense-making Engine that uses data analytics to identify abnormal behaviour of vessels based on maritime rules. Each rule is assigned a score. If a vessel flouts the rules and its aggregate score exceeds a threshold, the authorities will be notified.

Anomaly identification is further reinforced by the VTMS’s Geospatial Pattern Discovery Engine. It compiles a vessel’s historical geospatial data and should it veer off its usual routes, the system will notify the C2 Centre.

Another capability of the VTMS is the Entity Network Analysis. Using big data, the C2 Centre can pinpoint vessels related to blacklisted / watchlist entities even before they enter the point of destination. This gives authorities early insights on the vessels to undergo strict investigation when they arrive.

MSAS is the game changer when it comes to maritime surveillance – advancing with intelligent solutions and analytics technologies to help security agencies make faster and better decisions, paving the way for safer waters – and a safer world.

To find out more, do visit our webpage (https://www.stengg.com/en/products-solutions/maritime-safety-security) for more information.

Maritime Situational Awareness System (MSAS) developed by ST Engineering has been shortlisted as one of the top 5 nominees for the 2020 SAFETY4SEA Awards. The SAFETY4SEA Technology Award is to be awarded to any organization that provided a significant technological achievement or breakthrough or significant contribution in any aspect of maritime safety activity.