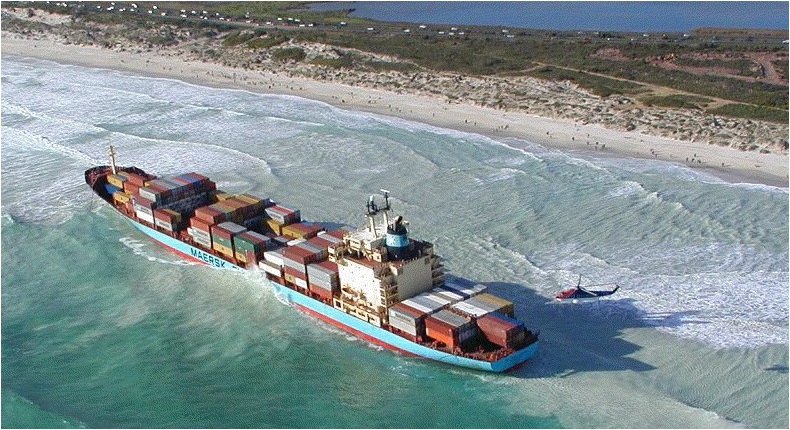 There are reports of bulk carriers, general cargo ships and a container ship under tow grounding in storm conditions, while another ship has capsized with seafarers lost.

Sand carrier Shunan 66 issued a distress signal on 13 October in Hainan Strait, south China, before capsizing and sinking with lives lost. Search and rescue vessels were mobilised in response and found four crew in a lifeboat. But two dead seafarers were picked out of the water and four remain missing.

In a different storm, general cargo Mv Maa was in trouble in the Bay of Bengal on 12 October during a regular cargo voyage. While at anchorage, it lost both its anchors and drifted. It eventually grounded at Visakhapatnam, India, requiring tug assistance to refloat and be towed to safety.

On 10 October, another general cargo ship, Minh Nam 07, was beached by a storm off Vietnam. While under a ballast voyage, this ship grounded near Ky Anh in the Ha Tinh province, again requiring salvage. All 16 crew were rescued by local fishing vessels.

In another casualty, an empty crewless container ship under tow ran aground in norther Vietnam. NKD Maritime, owners of Jakarta, thought to be formerly CMA CGM Jakarta, confirmed this vessel struck the coastline in Thua Thien Hue province on 10 October. NKD Maritime said salvors had been appointed and would attend the stricken vessel once weather conditions permitted.

Also in Vietnam, bulk carrier Dong Bac 22-03, with 21,200 tonnes of coal on board, drifted aground in a storm in Da Nang Bay. According to Fleetmon, this ship dropped both anchors on 7 October during the high winds and sea conditions. But these did not hold and the vessel drifted and grounded on 11 October. Crew remained on board waiting for the ship to be salvaged.

In another maritime accident, cargo ship Zhong Jin 51, with a cargo of 5,100 tonnes of steel, ran aground in Fuzhou province, China, on 9 October. Search and rescue vessels were mobilised and rescued 11 crew after receiving a request for assistance from the ship’s master, who feared the ship was in danger of sinking.

Maritime accidents and salvage were not just confined to east Asia this month, as a ship required assistance in the Bosphorus, off Turkey, on 14 October. Bulk carrier Santorini suffered engine failure and was drifting in busy shipping lanes in the Beykoz area of Istanbul, according to Fleetmon. Tugs were mobilised to assist this ship as it dropped anchor in an emergency to avoid any serious incident. Santorini was towed by tugs out of danger to an anchorage at Yenikapi in the Marmara Sea. It was on a voyage from Bourgas, Bulgaria, to the Spanish port of Cadiz.

Examples of successful salvage operations were presented in the Q3 issue of the International Salvage Union’s Salvage World.

In that issue, Multraship explained how it assisted cargo ship Deniz S, with a cargo of 4,500 tonnes of scrap steel, off Bulgaria, at the end of July. This ship suffered serious water ingress in the Black Sea and required emergency salvage assistance. Multraship immediately dispatched the tugs Multratug 26 and Alioth from Bourgas to the casualty.

On arrival, the tugs found the vessel with a list to port and down by its bow, with the main deck on the port side near sea level. Three salvage pumps were transferred to Deniz S to pump out water from a cargo hold to stabilise the vessel. It was then towed stern-first to Bourgas anchorage, where additional pumps were put on board and temporary repairs were applied. When the list was decreased, Deniz S was towed into port and redelivered.

Multraship also salvaged grounded fishing vessel Sursum Corda off Denmark. It sent Multratug 17 from the Netherlands to the site in northern Denmark and the salvage vessel Multrasalvor 4 from Germany. It also used Danish dredging vessel Toste R and the Danish tug Skinfaxe R.

A trench was dredged around the stranded vessel and it was refloated by the two tugs on a rising tide and towed to Thyborøn where the fish was unloaded before a dive inspection was carried out. Sursum Corda was towed to the Netherlands for repair.

In Finland, Alfons Håkans salvaged a grounded roro ship in September. Ferry Amorella was beached by crew for the safety of the passengers on 20 September.

Alfons Håkans mobilised a team of 11 salvors, three tugs and a diving support vessel to the casualty. Amorella was refloated, inspected and then towed to the nearby port of Långnäs where vehicles were discharged. It was then towed to Turku Repair Yard in Naantali and redelivered on 25 September.